skip to main | skip to sidebar

Ed Henry Is A Muppet

This Ed Henry piece is really one of the most ridiculous pieces of journalism I've read in a long time. If you caught the Obama press conference last night, you might remember Henry as the one who asked about AIG bonuses and why the administration waited two days to speak publicly about the issue. He received a succinct, somewhat curt, answer from the president: "Because I like to know what I'm talking about before I speak."


So anyway, today Henry files a piece on...the fact that he asked a question. It's the most smug, self-important, self-congratulatory article you can imagine and might as well be titled "Hey Mom, I asked a hard question at work today!" It's really beyond parody. Also, I love that in the photo accompanying the article, Henry looks like he's about to throw up as Obama is addressing him. 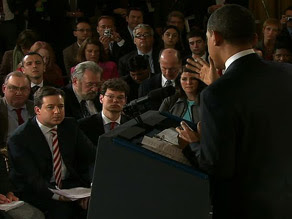 CNN was so impressed that one of their reporters asked a question, they had him do a guest spot on AC360 talking about how awesome it was.

During the conversation with Anderson, Henry says "The interesting thing is that [Obama] used a teleprompter." Really? The interesting thing is that, like thousands of other public speakers and politicians, he uses a teleprompter? Why is that interesting? What's interesting is the willingness of the mainstream media to help propagate this right-wing meme about Obama using a teleprompter. On the one hand, it's sort of amusing and pathetic that the best they can come up with as far as criticism is that he uses a teleprompter. It makes sense as a Rovean type of strategy where you try to attack your opponent's strengths, but accusing Obama of being a poor orator is so easily disproved that it's hard to see why they're bothering with this line of attack. And even if it's all a bit silly, it's still pretty shocking to see mainstream media outlets running with absolutely false stories.

By the way, I really recommend Wonkette's hilarious takedown on Ed Henry's article.