skip to main | skip to sidebar

Nothing says "Friday night" like the Baltic Dry Index.

So, the market's been all over the place. You're a-feared. It's a bit unfortunate that people pay such close attention to the daily action of the market; for one thing, the Dow Jones falling 200 points is a lot less important than things like job losses and retail sales. And investors are so crazy right now that the market is rising and falling dramatically on the smallest pieces of news. I've heard estimates that the US markets are about 30% undervalued simply because people are so panicked.

It's pretty hard to look at the stock market fluctuations and assess where we're at - like if we've bottomed out or are starting to recover. It doesn't get much (or really, any) attention in the mainstream media, but there's another index that economists pay close attention to. It's the Baltic Dry Index, and it basically tracks the cost of shipping raw materials by sea. The higher the BDI, the higher the demand is for shipping vessels to transport raw materials like coal, iron and grain. It's considered a leading indicator because increased movement of such materials is a precursor to increased growth and production. And the good news is that the BDI has been steadily climbing for a while now. Here's a look at the last 3 months: 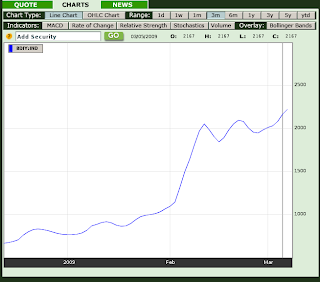 Nice - we haven't seen that shape for a while. And unlike a good deal of current stock market activity, the BDI is a cold, hard measurement of real movement and growth, not just investor sentiment. It's just one figure among a lot of bleak news, but it's reassuring.
Posted by Gabriel at 10:57 PM